Hitting ‘The Wall’ During Exercise 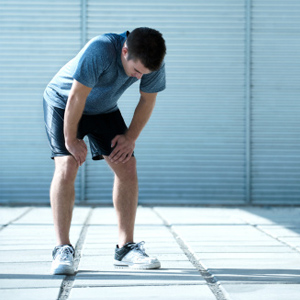 I’ve come across an interesting phenomenon that’s got me both a bit puzzled and kind of jazzed at the same time. There has been a point during the past two weeks, about halfway through my workout, after I’ve been working my hardest, or perhaps one of the trainers stops by my station and yells (or as they say, motivates) me into putting more effort into whatever station I’m doing at that time, I get this knot in the pit of my stomach that slowly radiates into full blown nausea. In the beginning that was a red flag and I’d slow down, but after a while when I pushed harder the nausea would turn into this heavy feeling in my muscles that make any movement feel ten times harder. It’s a strange feeling and not entirely pleasant, in fact it’s downright awful. The thing of it is that it only lasts the length of the workout and then it’s gone and I feel great the rest of the day. It’s become a familiar feeling and it’s come to a point when I can usually predict when I’ll get to that point during the workout depending mostly on where my heart rate is. I asked the trainers at Fit in 42 that I get this bad nauseous feeling during my workouts and they enthusiastically said that was a good thing. Wait, what?! You mean this terrible feeling is good? They said that getting to that point was where the real fat loss was happening, that’s where I would get my results, that I should be aiming for that at every workout. I wasn’t sure why feeling like I was going to toss my cookies almost daily was a good thing, but I took their word for it, kept working and decided to do a little research.

What is The Wall?

Physically– Believe it or not “The Wall’ is actually a physiological reaction to stress on the body. There is a point during long or strenuous periods of time, when you are working hard (I mean really HARD), when the body uses up most of the nutritional reserves it has stored. When you perform any kind of exercise the body will generally burn either fat or carbohydrates. A person’s body burns fat more slowly and efficiently but it’s harder for the body to access that fat (bummer right?!). Carbohydrates on the other hand are burned more quickly, but also run out faster. Once a person uses up their carb stores, the body will generally switch to exclusively burning fat. This is the coveted stage people looking to lose weight aim for during a workout. If you keep going, burning that carb then fat as fuel, at some point you may reach a stage where your body will burn fuel faster than it can access it, this is where you’ve hit the physical ‘Wall’ where you’ve reached the peak of your physical fitness.

Mentally– When you hit the wall your body is exhausted and most likely in pain. It’s when you’ve hit the limit of your physical fitness; coincidentally this is usually the point right before the goal you’re trying to get to.

To me this is the real Wall- It’s the point at which you’ve reached the psychological and physical threshold of your physical fitness. Once they reach The Wall most people will often stop, and it makes sense. Why would you seek out such discomfort? It would seem counter intuitive pursue the pain.

Let me stop for a second and elaborate on this. To me, The Wall is not some mysterious barrier you come across

when you’re working out or running. The Wall is more like, entering the UFC Cage. It’s a battle between your Will Power and your Body: two will enter but only one will leave. And the battle is bruttal! Because your Body is used to getting its way. It gets the food it wants, the sleep it wants, it moves when it wants and does nothing when it feels like it. The Body is used to winning and your Will, not so much. And when you manage to overpower your Body’s desire to stop, it doesn’t even feel like glory right away. Once you get the Body to push past the wall you hardly feel victorious, your Will feels PISSED. Pissed that it had to get dirty, angry and rude to get the Body to move.

It feels like your Body turned into a cranky baby that decided to throw a temper tantrum and embarrass you in the middle of the mall  and your Will has to drag that baby kicking and screaming past the finish line. Once you get it under control you’re just mad. That’s what getting through The Wall is like for me.

So at the Wall you can stop and maintain that current level or move past it. Push your body to break itself down in order to then repair itself to become stronger, faster, and more resilient to perform even better than it had before. Once you’ve hit the wall, the only thing that’s going to get you past it is sheer will power and discipline

Keep in mind that when you exercise your body is breaking down muscles so they can be rebuilt stronger. This is also known as the Overload or Supercompensation Cycle.

From a physical standpoint you are pushing your body past the point where it is accessing fuel efficiently enough to maintain that level of physical activity. If you keep stressing your body it will eventually adapt, as the body always does, by learning to access the nutritional reserves such as fat more efficiently. The result: a faster metabolism. Ta Dah! A faster metabolism: the holy grail of anyone seeking to improve their physical fitness.

Part of that overload also happens in your mind; you have to move past the point of deep discomfort. The body is exhausted, in pain and wants to stop. Your body is saying “Crap, I can’t go any further than this, I need to slow down.” At this critical point in order to really achieve progress your mind has to step up, muster all its will power and discipline to tell your body: ‘Listen to me. You’re going to keep working until I tell you to stop.’ That is the only way you are going to get better….

Why does this matter?

This mental aspect of ‘The Wall’ is by far the most important thing I’ve learned since I started this session of Fit in 42, perhaps since I started my journey a year ago. At this point in time I am in the best physical shape I’ve been in my entire life. It feels fantastic to feel healthy and strong. Yet I know I am capable of more, I can see the road ahead and it can still feel daunting, there is so much left to overcome. Taking the time to understand that my progress is not limited by my current physical strength or past limitations, but can be improved by my will and mental discipline makes this process feel more in my control. It means I can do this, and that is so very empowering.

So tomorrow, when I wake up early in the morning and head to my class I’ll be pushing my body until I feel that familiar wave of nausea, that pain where my body is asking me to please, please stop, it doesn’t think it’ll make it through this. That is my cue to muster some tough love and tell my whinny cranky body “Listen to me you baby: you’re going to keep going, and you’re not going to stop until I tell you so. F**k that wall, we’ve got better places to go.” I have no illusions, I know it’s going to SUCK, but I’m willing to go there and see what my body does.

“Don’t stand for mediocre or you will never see progress.”

One thought on “Hitting ‘The Wall’ During Exercise”