WOW! That’s the first thing I have to say about what has been the best Zumba experience I’ve had so far. I attended my first Zumba master class and it was amazing.

If you’re not familiar with a master class it’s essentially an extended Zumba session. It’s different from the weekly classes in that it’s often used to mark a special occasion like the opening of a new studio, a fundraiser or for a current gym/studio to promote themselves. They’re usually about two hours and will feature a special guest instructor and/or a group of local instructors. This class was organized by one of the gyms I frequent, Fitness Elements, and featured instructors in the Coachella Valley who brought their best stuff to the floor. It was good to see the variety of teaching styles from each instructor who brought their own flavor to 4-5 songs in their session. In addition this master class featured a special guest, Miss Debi Fit from LA. This lady was great, she even brought her very own backup crew with matching ‘Miss Debi .com’ shirts and some serious dancing skills.

The most impressive feature of this master class is the energy and intensity of the whole session. There was support and cheers coming from all over the place encouraging the instructors who in turn kept the intensity high to the very end. I got so absorbed by the energy I lost myself in the moment and gave it everything I had (what someone called ‘working it!’, and work it I did!) Events like this live up to the Zumba tag line “Ditch the workout, join the party!”

I’m totally hooked on this whole Zumba thing now. I had yet to experience that level of intensity in a class and I can’t wait to have it again. 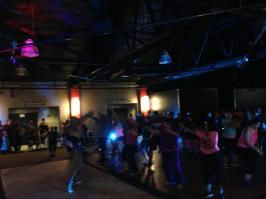 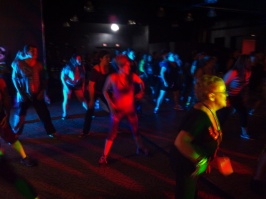 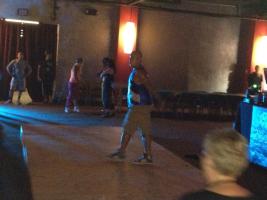